With Eurex Clearing circular 022/21, Eurex Clearing announced its intention to actively convert the remaining cleared legacy LIBOR-based interest rate swap (including forward rate agreements) and basis swap trades to standard and liquid RfR OIS trades before the fallback provisions are triggered. This Newsflash is intended to deliver further details as well as a timeline of the planned conversion.

Learn more about Eurex topics! To help Clearing Members keep up with all Eurex updates, all support information is now available via Eurex Support and on the go via the personalized Eurex App.

Simulation information regarding the timeline and the details of the dress-rehearsal of the transition process will be communicated via a separate Eurex Clearing Readiness Newsflash.

B.  Legal form of the conversion

C.  Operational form of the conversion

The roll dates and accrual periods of the RfR coupons of the Amended Trade(s) are the same as for the original LIBOR-based trade. Coupons that require a LIBOR-based fixing after 31 December 2021 are calculated without observation period shift by compounding the RfR index over the LIBOR-based coupon periods. The settlement of these coupons is aligned with the respective RfR OIS conventions, i.e., for GBP-denominated trades, it has no payment offset and for CHF- and JPY-denominated trades, it has a two business days payment offset.

The conversion preserves the economic equivalence of the Amended Trade(s) with the original LIBOR-based trade by adding the relevant (not compounded) spread adjustment specified in the respective fallback provisions and as calculated by Bloomberg. No rounding or other modifications to that spread apply.

The terms and conditions of the fixed leg of the Amended Trade(s) are preserved from the original LIBOR-based trade.

A one-off cash compensation on trade level is introduced and carried out by Eurex Clearing as calculation agent to mitigate the associated residual change in net present value between the original LIBOR-based trade and the Amended Trade(s).

I.  Treatment of irregular periods

The value transfer caused by the divergence of this approach as part of the conversion with the approach specified to be applicable in case of an index cessation in Chapter I Part 1 Number 1.8.2 of the Clearing Conditions (or the corresponding provision in the FCM Regulations) and Section 7.9 of the 2006 ISDA Definitions (as amended by Supplement 70) will be reflected in the one-off cash compensation (see H.).

Notable exception of the conversion mechanism is the treatment of LIBOR basis swaps having compounding specified on at least one leg. Such swaps will be terminated on the conversion weekend with a termination fee equal to the net present value of the trade and no replacement trade. Currently, Eurex Clearing has no such compounded LIBOR basis swaps outstanding.

For avoidance of doubt, LIBOR swaps having a final reset before the respective LIBOR cessation date (i.e. here, 31 December 2021) will not be affected by the conversion process.

Below table applies for all affected currencies: CHF, GBP and JPY, and lists the replacement trades which constitute the Amended Trade(s) grouped by trade type of the original trade. 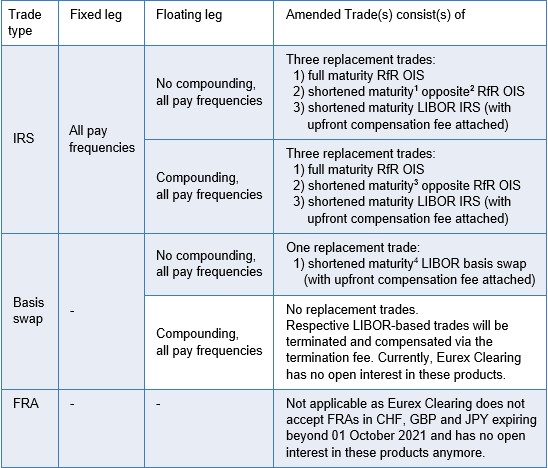 1)  Both the fixed and the float leg of the trades 2) and 3) will have in this case as maturity the end of the last LIBOR floating coupon having a fixing before the LIBOR cessation date on 31 December 2021.
2)  Opposite trade in all examples is used in the sense of having mirrored fixed leg to the shortened LIBOR trade, i.e. if the LIBOR trade pays fixed coupons, the opposite trade will receive the same fixed coupons.
3)  If a compounding period of an IRS swap requires any LIBOR fixing after 31 December 2021, this period is replaced in the Amended Trade(s) as a whole with compounded RfR plus the spread adjustment related to the LIBOR index. The maturity of trades 2) and 3) is set to the end of the previous LIBOR coupon. In case of compounding with a zero coupon pay frequency, the replacement trade compounds over the whole calculation period. Currently Eurex Clearing has no such zero coupon compounding swaps.
4)  In the case of the basis swap trade type, each floating leg of the replacing trade will have a final cashflow at the end of the last respectively LIBOR floating coupon having a fixing before 31 December 2021.

Upon completion of the conversion, LIBOR floating-rate references in the respective currencies will no longer be eligible for the EurexOTC Clear service.

Operational details as well as examples of the converted trades will be available in due course together with the operational booklet of the planned LIBOR conversion. Please note that some points of the outlined process and considerations are subject to future adjustments and changes.

If you have any questions or comments, please do not hesitate to contact us at: client.services@eurex.com.

How to keep up with news? Get the latest Eurex updates fast and easy using: Eurex App, LinkedIn, YouTube, or visit our website.

We care about your opinion

Let us know what you think of our website.
Rate now!