As we moved into the second quarter of 2022, the macroeconomic backdrop still supported our portfolio. Central banks across the globe are grappling with increasingly elevated levels of inflation at a time when voices are growing louder on recessionary concerns. This, together with the ongoing conflict in Ukraine, is causing tensions around the speed at which central banks need to raise rates and what is the new terminal rate to hit the brakes on inflation. Considering the rhetoric around the factors mentioned, futures volumes were well supported across the portfolio in April. The German segment outperformed with execution of the long end, where Buxl futures saw a decline versus April 21, with c.1.3m contracts trading versus c.1.5m in April last year. One point to note regarding Buxl is the contract was coming off a very strong 2021. The front end of the curve saw the largest percentage increase, with Schatz volumes 103.3% higher versus 2021. Bobl and Bund segments traded 10.1m and 15.4m contracts, respectively, an increase of 30.3% and 7.8%.

With yields continuing to move higher, the options segment continued its strong start to 2022, with volumes up 3.7%. The belly of the German curve saw the largest percentage increase with volumes 149.8% higher, trading 1.147m contracts. The Bobl was closely followed by the end, with Buxl volumes 113.1% above April 21 levels. Schatz brought up the rear, with an increase of 9.4%. The Bund was a tale of two contracts, with the weeklies trading 98k, an increase of 169.3%, whereas the core segment was 20% lower at 2.61m contracts. The French OAT segment saw a 21% increase, and the BTP segment saw a decline of 36.9%. However, as May entered, the BTP segment has outperformed with volumes averaging c.19k contracts. Overall, the BTP segment has continued to trade above 2021 levels.

Away from core rates, the ETF options and ESG segments continue to go from strength to strength. The ETF segment was coming off a record Q1, and this momentum continued in April. Interest was spread across several underlyings, but the Emerging Market segment witnessed the largest percentage increase with 22.4k contracts trading, an increase of 899%. The corporate bond ETF was 108% higher than last year. On the ESG front, end-client activation is a focus for the business, which has had a positive impact on volumes. As more clients increasingly become active, we expect to see a bigger impact on the daily traded volumes. 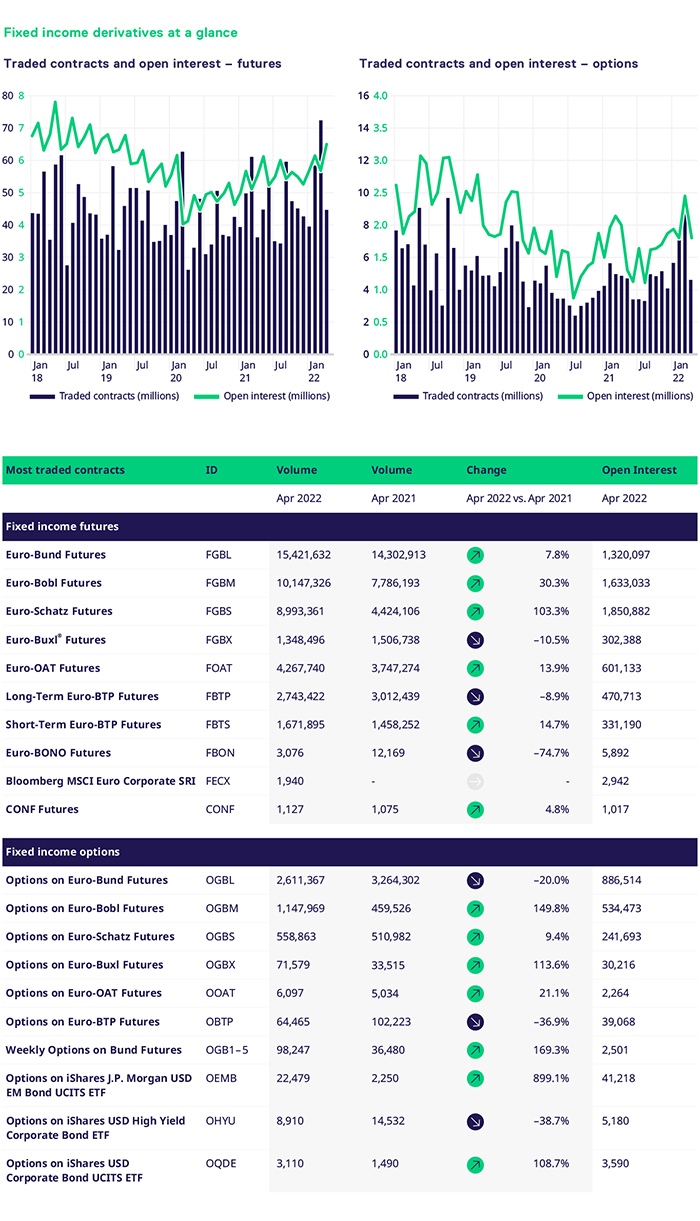 Ticket sales and registration are open!
Find out more