The Public Quantitative Disclosure (PQD) is an internationally agreed format defined by CPMI-IOSCO with the intention of enhancing CCP market transparency. Eurex Clearing has been publishing its PQD since 2015 and continues to strongly support CCP transparency and market stability.

With the disclosure of Q4/2016, Eurex Clearing began a series of commentary to highlight key trends, discuss current topics and shed some light on selected data points. The current note is the third part of the series and contains key highlights for the second quarter of 2017.

Testing member portfolios under extreme but plausible scenarios yields valuable insights into potential losses beyond margins. Stress test results are used for the sizing of the CCP’s Default Fund, a significant element in CCP financial resources and hence ultimately ensure the safety of the clearing business. 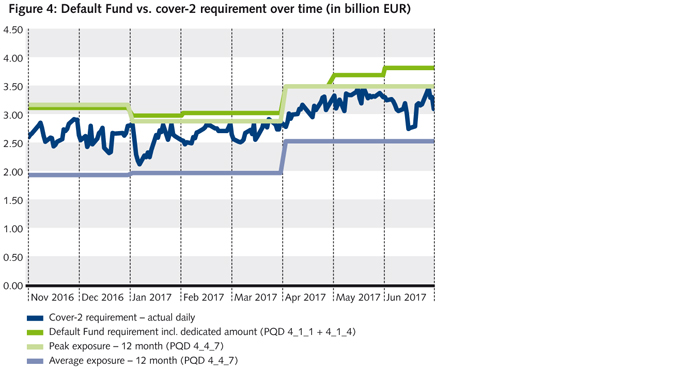 Key points to consider while interpreting the stress testing numbers:3

• The adequacy of the Default Fund is monitored daily based on the results of the cover-2 stress test scenario (compare the dark blue and green lines in Figure 4 above)
• Eurex Clearing defines the cover-2 at the level of company groups (including affiliates and all clients)4 with the largest losses over all stress testing scenarios during the holding period. Client positions can be a key driver (see Figure 1) under assumption that no porting of client positions is performed (independent of the segregation model). This is a conservative assumptions, required by EMIR and in line with the CPMI-IOSCO guidance on resilience of CCPs
• Eurex Clearing assumes that the two company groups default within the holding period of several days under different market scenarios (e.g. one member may default during a market event, which causes falling stock prices, and the other one during a market rebound when stock prices are rising again)
• The netting logic used to calculate the stress results on a company level respects segregation rules, which do not allow to offset segregated client gains with proprietary losses, but permit that client losses are offset with proprietary gains
• Any collateral posted in excess of the margin and Default Fund requirement (i.e. overcollateralization), is not considered in the stress shortage calculation, assuming that overcollateralization may be withdrawn by participants.

2  Eurex Clearing’s Default Fund size is recalibrated on a monthly basis in order to reflect changing market conditions. Intra-month mitigating actions can be taken to ensure that a certain minimum buffer above the cover-2 requirement is always maintained.

4 Please note, that the company group and its affiliate are assumed to be in default under the same market scenario

A new period is upon us and even though it's tempting to look back, let's look forward.
Find out more